My recent photo essay in Foreign Policy discussed the use of images of children from conflict zones in political communications and was based in large measure on my experience working at NATO.  But it was also informed by a close reading of totalitarian propaganda, mostly from the 20th century, and for anyone familiar with that horrifying legacy should explain much of my unease about using the images of children in political communications.

Understanding how dictators ruthlessly exploit children to sand their iron image should make us think twice before publishing pictures of cute kids, because history’s butchers did the same thing. Those who survived that history carry those images in their head.  Democracies are different, but that is all the more reason for us to be cautious and deliberate.  We must learn from history and avoid the tropes that despots past and present have left littered in their path.

That said, what strikes me most after surveying decades of propaganda is how rarely dictators were photographed with children.  This should give us heart.  As I note in my Foreign Policy article, this is very likely the modern-day equivalent of the Emperor’s New Clothes — children are not over-awed by trappings and power, and probably cannot even recognize such (for a contrasting opinion, see the photo of Kim Jong-Un below).  They are unimpressed and speak the truth. This would mortify those squat, Napoleonic rulers such as Joseph Stalin and Kim Jong-Il, standing no taller than five feet five inches in platform shoes. Real children are risky.

You can see how easily this can work to a leader’s detriment.  Here is a picture of Vladimir Putin with some Russian kids in traditional dress (left), taken in 2006. His unease around children is manifest both in this photograph and elsewhere, which probably keeps this  from being a simply creepy photo opportunity. Strangely he appears more relaxed when engaged in judo competition with children a fifth his age, which says more about his character than he likely intends to communicate. (Or, according to Masha Gessen, perhaps he does.)

Putin has been remarkably visible but under extraordinarily controlled circumstances. So it’s probably no mistake that he doesn’t spend much public time with children.

Knowing that makes this photograph — by most accounts a genuine, unguarded moment — both unique and particularly chilling.  It was a rare moment when Stalin, at the height of his control over the Soviet Union, met this little girl from the Buryat-Mongol region at the Kremlin in 1936. The photo was widely circulated as “Friend of the Little Children,” turned into a lithograph as well as a sculpture and other propaganda means.

But the iconic photograph (right) is perhaps better known than the original, uncropped version (above), which included M.I. Erbanov, first secretary of the Buryat-Mongol ASSR. His cropping and airbrush from the original was not just aesthetic: it was political, as he was purged from the Party under Stalin’s orders.

More chilling indeed, the girl’s parents both met an untimely end. Her father was shot for “spying for Japan”  and her mother was also murdered under mysterious circumstances. Only their deaths took this icon out of wide circulation. The girl’s fate is not known.

“Thank you, Comrade Stalin, for our happy childhood.”

Otherwise Stalin, who paranoically feared assassination, stuck to doctoring old photographs, faking his own history, or simply propagandizing children’s love for him.

Mao Zedong, who was even more reclusive and paranoid than Stalin, perhaps perfected the art of cartoon propaganda.  There is simply no photographic evidence that I know showing Mao consorting with the Chinese public after he took control of the country. This ironically gave him entirely free license to mould his own image. The resulting repository of this unique art form is a rich vein of effluent, so I’ll only provide a single sample to emphasize its utter detachment from reality. Remember that this is simply a drawing. It has no basis in real life.  Its value is simply as a propaganda image, to communicate with and maintain support from the Chinese people.  It’s similarity to the Stalin image above, of course, is hard to ignore: it is entirely hero worship, the people (the children) idolizing their leader.

All these images, whether photograph or cartoon, extol the leader. They exalt a cult of personality, and one cult only surmounts the other. Stalin and Mao often seem to have reached the apogee of self-worship, but for sheer insanity North Korea under the Kims and Romania under Ceausescu can more than hold contention. 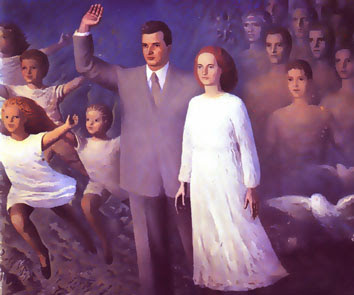 Nicolai Ceausescu controlled Romania for more than a quarter century and drove his country to ruin, madness and utter moral depravity. He cultivated an elaborate personality cult based on his admiration of Mao’s China and Kim Il-Sung’s North Korea. The propaganda involving children is particularly grotesque given the combination of policies he forced on the country. He extracted a ridiculously high family birthrate (five to ten children per woman under 40) by virtually abolishing abortion and birth control, and drove the economy backwards into the 19th century in order to pay off foreign debts. As a result, many Romanian families could not afford to support their families; illegal abortions soared, of which thousands of women died as a result; and tens of thousands of unwanted children were abandoned to horrific state orphanages that were discovered only after his overthrow in 1989.  An elaborate propaganda apparatus recorded his every move and recently served as the raw material for The Autobiography of Nicolai Ceausescu. This “found film” documentary serves my contention that autocrats prefer to avoid real children whenever possible, as the only time he’s seen meeting some is at about the ten minute mark of this marathon three-hour film (which you can watch, of uncertain copyright provenance, here.)

The Kim Dynasty of North Korea has similarly raised propaganda to its own peculiar art form.  Again, rarely did Kim Il-Sung or his son Kim Jong-Il, take photographs with actual children, although they do exist.  A vast and strangely amusing collection of photographs of Kim Jong-Il looking at things can be found here, with not a child to be seen. (It’s probably important to note that in most of the propaganda cartoons I’ve found of the two Kims, Kim Il-Sung is seated at center holding children while Kim Jong-Il is standing looking on. I’m sure Kim the younger wasn’t sensitive at all about his height.)

EPA via The Daily Mail

Much speculation has surrounded the Great Successor, Kim Jong Un, particularly about his youth.  Nobody knows his age, but he is expected to be in his twenties. He appears more willing to be photographed with children (although these appearing with him on the left are probably young teenagers).  Keep in mind that life except for the chosen in North Korea is unbelievably grim, and children particularly suffer.  The average height difference, depending on gender, between North and South Korean children is between 1.2 and 1.6 inches. Obviously, they have nothing to envy in the world.

What’s interesting about Kim Jong-Un’s appearance is how much he appears to mimic his grandfather’s look when comparing some of his recent photographs to old propaganda pictures (again, entirely made up in cartoon form) of Kim Il-Sung published decades ago (see below – updated from a previous post). Gone is his father’s drab overcoat and unisex quasi-military uniform. It is replaced with a period costume seen in propaganda pictures of his grandfather depicting the pre-war era, evoking an earlier time (and a younger, handsomer Kim Il-Sung). This is likely an explicit means of connecting the youngest Kim to the state’s founder by allusion to a kind of collective cultural and propaganda memory.

These pictures are only a representative sampling of how the world’s most repressive regimes exploit children for propaganda purposes. (I deliberately avoided any use of Adolph Hitler, for example, whose image is simply too provocative to come to any productive application.  People may feel the same way about Stalin, Ceausescu and the Kims, and for that I apologize, but we need to display some horribles in order to understand them.)  I still remember, for example, how Fidel Castro took full advantage of the Elian Gonzalez affair and how Cuba continues to exploit that ugly episode to support its appalling regime.  You may recall the “baby milk factory” at Abu Ghraib which was targeted during the 1991 Gulf War, a facility that was part of Saddam Hussein’s then-active unconventional weapons production program, or Saddam’s creepy pawing of Stuart Lockwood, a five-year-old human pawn in that conflict. Anything considered to harm children, or the welfare of children, can be used to good propaganda effect.  Under repressive regimes, which control all means of communication, any information that benefits the state is good (even if it isn’t true) — and any information that harms the state (especially if it is true) is bad and must be suppressed.

The people who live under these regimes know and understand this. Which is why we must be all the more conscientious and diligent about how we communicate what we do, especially when what we are doing is helping children and their family.  The temptation to exploit them is simply too great.

4 Responses to How Dictators Kiss Babies