The Canadian academic and politician Michael Ignatieff has written extensively and profoundly on law, politics and policy during an extraordinary career that has taken him from Toronto and British Columbia to Oxford, Cambridge and Harvard to the leadership of Liberal Party. His corpus includes more than a dozen books and scores of articles.

He remains one of the most active and engaged North American public intellectuals of our time and possibly that most rare and courageous one who crosses over from thinking about politics to engaging in politics. Rarer still for a political man, he continues to think while he acts. Famously, he wrote about second thoughts supporting the Iraq War, a nuanced mea culpa exploring the nature of political judgment. And more recently, he reviewed All the Missing Souls by David Scheffer, a diplomatic memoir of sorts about the development of the war crimes tribunals during the 1990s.

I want to take measured exception to Ignatieff’s and Scheffer’s approach to the war crimes tribunals, which I see as representing the consensus view of international law as embodied by these international courts.  Scheffer, who served as special envoy for war crimes in the Clinton Administration, was pivotal in creating the tribunals for the former Yugoslavia and Rwanda and the International Criminal Court to investigate and punish perpetrators of heinous war crimes. Ignatieff was an early advocate for intervention in both those countries to end those crimes. Both condemn opponents in the Clinton and Bush administrations who want to exempt Americans — politicians and service personnel both — from the jurisdiction of the international courts. In Ignatieff’s words, this is true American “exceptionalism” — Americans are exceptionally exempt from the oversight of international law and  can act unilaterally and with impunity anywhere and against anyone as a result.

This is a seriously problematic argument from two perspectives.  First, the International Criminal Court was created expressly with a quasi-federal purpose in mind: in the event that a state is too weak or politically unwilling to find or punish war criminals, the ICC had the mandate (if not the means) to carry out justice on behalf of the victims. The special tribunal for Rwanda was similarly created for this end.  An analogy is the U.S. civil rights statutes enacted during the Civil Rights era to bring down federal investigators on recalcitrant local jurisdictions in the case of gross abuses of human rights. But these would only be invoked in the event that the local authorities abdicated their responsibility. No serious observer has alleged that during the wars of the last decade that the American judicial system has shirked its duty policing American servicemembers, and our political system has demonstrated extraordinary resilience at the same time.

But the more important argument to be made about these courts is political.  As my friend Pierre Hazan argued in his book Justice in a Time of War, the war crimes tribunals were wielded by Western leaders as a hammer during the conflicts in the former Yugoslavia. That is, the courts were a political tool — a weapon just as useful if not as destructive as a cruise missile — applied to resolve a political problem: the war.

The essentially political nature of these courts becomes more salient the more we realize that political conflicts become bound up with them.  The desire to place American servicemen under the ICC’s jurisdiction surely is proof enough of that, particularly as a result of the visceral hatred of President Bush’s policies in Iraq.  But another, less polarizing example is the war in Liberia and the peaceful transition to democratic rule becoming contingent on the surrender of the former president Charles Taylor to the Special Court in The Hague, or the European Union’s insistence that Serbia capture and surrender indicted war criminals on their territory in exchange for a favorable position in accession negotiations.

Moreover, the entire concept of transitional justice — with deep respect to my friend Pierre and the work of thousands on this issue in very difficult places — is inherently political. This is the notion that a court — a judicial body — should help achieve peace and stability by administering justice. These are not bad things, surely, but we must admit they are political and social goals rather than strictly legal objectives.  Only in the international arena are we willing to to allow a judicial body to execute a transparently political function.

To further this point: there is really no reason why Charles Taylor, Radovan Karadzic, Ratko Mladic, Leon Mugesera and the other cast of horribles could not be tried by modern courts in Western countries. This is perhaps the real scandal Ignatieff and Scheffer should be writing about.  But in many cases — Taylor and Karadzic come to mind — this would open up a series of unpleasant questions for the prosecution. Such as, if they were war criminals, why did the U.S. and Canadian governments have open political relations with them? Avoiding war crimes prosecutions at home becomes a political issue best resolved by “clean” international tribunals.

If we play through the implications of this question we recognize the uncomfortably political nature of the international courts. If we impose upon domestic courts the responsibility for prosecuting war crimes committed by foreign actors against populations abroad, we stretch our judicial systems into the exclusive domain of the executive and legislative. We already saw during the wars in the former Yugoslavia how awkward it was to negotiate the end of a war with a political leader under threat of international indictment.  More important is the recognition that extending domestic powers of indictment or investigation also requires policing powers, which abroad are exclusively military. That invokes executive powers, which are resolutely political for exceptionally good reasons.

An inverse approach to this problem involves the two men pictured at the top of this post. They were very recently arrested by Serbia and extradicted to The Hague and are now on trial for war crimes. Knowing their case as well as I do, I would like nothing better than to see them die in prison after conviction. If this is the preordained outcome — no one seriously doubts it, not even the Serb chauvinists who still support them — what real difference is there between that judicial outcome and the political equivalent of their death on the battlefield? After all, that’s effectively what Milosevic’s interminable trial achieved in The Hague.

It is important to remember we are not strictly limited to political or judicial means to achieve justice for these high crimes.  And it is important to know that justice means different things to different political cultures.  We forget that forgiveness, even amnesty, is important to justice.  (Hannah Arendt once wrote that forgiveness is a political act.) South Africa and Morocco have created truth and reconciliation commissions.  Or take the example of the Brasil: Nunca Mais, a South American samizdat commission that simply and suddenly exposed the former military regime’s human rights crimes.

I am not inclined to criticize Scheffer for his idealism and struggle against bureaucracy to create a rule of law to end war crimes. But I am suspicious of the peculiarly political aspect of these courts, and particularly of the unwillingness of international legal experts and scholars to admit and confront the paradox of their mission. Warfare is inherently political, so it will be difficult to separate the commission of crimes during war from their political context. In order for justice to be achieved in wartime, we have to be willing to admit that much. 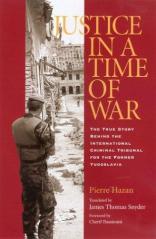 As a law student studying in an appalling banlieue satellite campus of the University of Paris in 2000, I quite by accident stumbled across a book by Pierre Hazan on the Yugoslav war crimes tribunal.  Published that year as La Justice Face à la Guerre, I instantly recognized it as the first significant history of the international court established to try war criminals from the conflict that tore apart the former Yugoslavia during the 1990s.

Since I was then studying international criminal law, I knew no such book existed in English. Filled with visions of glory — or at least knowing I had nothing to lose — I wrote Pierre in my middling French asking him if he would allow me to pitch a translation to American publishers.  To my astonishment and eternal gratitude he accepted.  During the next four years I worked feverishly on the translation, adding notations and photographs.  It was published in 2004 by Texas A&M University Press as Justice in a Time of War.  Pierre graciously and enterprisingly added an additional chapter about the trial of Slobodan Milosevic — his arrest and extradition to The Hague occurred after the French edition appeared — and eerily predicted Milosevic’s death in detention.  (For myself I saw Milosevic during his trial in The Hague while on a trip to The Netherlands in 2003, but witnessed nothing of his infamous histrionics.)

You can purchase Justice in a Time of War at Amazon.com (including Kindle format), where it remains a top seller on military justice and the former Yugoslavia.

Pierre is an accomplished war correspondent for Libèration in Paris and Le Temps in Geneva and has since expanded his reportage into scholarship on transitional justice and other issues at Harvard University, the U.S. Institute for Peace, and l’Institut d’etudes politique (Sciences Po) in Paris.  You can read more about him here.  He has since published additional works in French and in English, including his most recent, Judging War, Judging History.

The International Criminal Tribunal for the former Yugoslavia (ICTY) has lasted longer than all of the wars in that benighted former federation combined. Fortunately the two worst war criminals are now in the dock — Radovan Karadzic and Ratko Mladic — and with the last wanted suspects in custody the long mandate of the court will at last have an end date.  It also means that the independent nations of the Balkans will be able to reconcile and move towards prosperity and protection within the European Union and NATO.