Your Inalienable Right to Rock 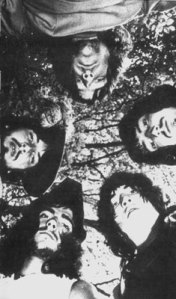 The Plastic People of the Universe (Czech Radio)

The recent death of the dissident playwright and Czech President Vaclav Havel reminded me again how badly misunderstood politics and power are in the waning age of totalitarian regimes.  I wrote about Havel’s attempts to galvanize the opposition in Czechoslovakia during the 1970s and ’80s through the experience of the least-known famous rock band of all time, the Plastic People of the Universe. The Plastics, as they are still known, were critical to the formation of a coherent Opposition at a key moment during the Velvet Revolution in 1989. As a result, they have a lot to teach us about the nature of politics and the concept of the political.

I spent quite some time trying to publish what was, in its final form, an awkward, over-long hybrid essay combining the history of the Velvet Revolution with a theoretical treatise. But I still think it’s important because it demonstrates how political judgments can overwhelm what should be strictly left alone to the culture, and that in closed authoritarian or totalitarian states those political judgments are controlled exclusively by the state power what is left to the public in open, democratic countries.

At the core of the Plastics’ predicament in the 1970s was this: do you have an inalienable right to rock?  This is really a question of aesthetics, not politics, and in open, free states the dividing line between aesthetics and politics is broad and rarely crossed.  But under the old communist regime, nothing passed without official political judgment — including aesthetics, which served the state.  After the crushing of the Prague Spring in 1968, the authorities reached the point where they believed the Plastics threatened civic order and arrested the band and their fans. In effect, the state determined there was no space in the entire country free from its political judgment and control.

The galvanizing moment came when Havel and his fellow literati dissidents joined with the Catholic opposition, the labor unions and others who had until that point been organizing separately against the regime. The Plastics’ arrest was a step too far for all of them, who realized that if pure art could be under threat then there was at last no safe space free from government control. This common threat brought them all together under the aegis of Charter 77, which threw down the gauntlet under the Helsinki Accords which Czechoslovakia (along with the rest of the Warsaw Pact) had signed pledging their countries to uphold human rights.

At least as importantly, despite a decade of persecution, Charter 77 united the Opposition as an effective shadow government to challenge and negotiate the regime out of power when street protests crescendoed in 1989. None of this could have happened without the Plastic People of the Universe.

Which makes the Plastics’ avowed lack of interest in any political agenda so much more intriguing. While we in the West almost expect our cultural figures to take sides in the political debate, the Plastics wanted no part of it. Their innocence of politics makes their arrest so much more significant: because the authorities came down on them just for playing rock’n’roll, the violation had a more acute, if not necessarily higher profile than the arrest of a rabble-rousing pamphleteer like Havel.

The story of the Plastics, Havel, Charter 77 and the Velvet Revolution helped me answer one deceptively simple question: what do we mean when we talk about the political?  This had already been answered definitively, it seemed, by the Nazi jurist Carl Schmitt, who defined the political as state interests against external enemies. Leo Strauss, in commentary on Schmitt’s “The Concept of the Political,” lightened this harsh assessment by arguing Schmitt’s dialectic implied the political equates with the moral. But if that were true, then the two words would be interchangeable, and they are not.

The story of the Plastics, while sobering — many members of the band, but also including Havel, spent years in prison — is one of faith in politics and political change over many years, and we can take heart in their example. Indeed, their innocence is most heartening of all. Hundreds of thousands of people across Eastern Europe, the Balkans, the Caucasus, and now the Mahgreb and the Persian Gulf are following their faith.

NATO fan, ex-diplomat, author, critic, translator, and former U.S. Congressional speechwriter. All opinions expressed here are my own and do not necessarily represent the views of the U.S. government or any employer, past or present.
View all posts by James Thomas Snyder →
This entry was posted in Books, Politics and Political Theory and tagged aesthetics and politics, dissident playwright, prague spring, president vaclav havel, theoretical treatise, totalitarian regimes. Bookmark the permalink.

1 Response to Your Inalienable Right to Rock